I wonder how often Ruth Reichl sits back and thinks, “I can't believe this is my life.”

Because as I read Garlic and Sapphires, like when I read Comfort Me with Apples, I had several moments when I could hardly believe I was holding a biography. The characters, the anecdotes, the whole story arc…too good to be true, it seemed.

In Garlic and Sapphires, Reichl writes of her time as the New York Times restaurant critic — a job she made all the more interesting by adopting different personae to go unrecognized at the city's finest establishments.

But beyond Reichl's extraordinary experiences and enviable career, I suppose I'm so in awe of her life because she is a brilliant storyteller. Her memoirs are a thrill to read, and the restaurant reviews peppered throughout Garlic and Sapphires show Reichl's range and skill. New Yorkers might have disagreed with her gastronomic opinions, but they all ought to have admired her narrative style.

I loved the book. I only wish there were photos of her in costume because I'd love to see this woman as blonde and polished Chloe, hippie redhead Brenda, 68-year-old Betty Jones or tweed-clad meanie Emily Stone.

I can't wait to hear more of Reichl's great stories when she comes to speak at the Skirball Center in LA next month!

how to get him back

“This book will be your companion in the kitchen whenever you wish to create deliciousness.”

Wednesday is the one year anniversary of the publication of The Flavor Bible. James Beard Award-winning authors Karen Page and Andrew Dornenburg asked us to mention something here, and I am happy to do it. The Flavor Bible has been incredibly helpful and influential to my cooking. It was just over a year ago that I moved out of campus housing and into a place with a personal kitchen. For someone who was comfortable with basic cooking techniques but looking to move away from the

recipes, The Flavor Bible was, well, a godsend.

The book is organized like a reference book. After a lovely introduction to the components of taste, ingredients are included in alphabetical order with a list of complementary ingredients. So when you're looking at that rotating spice rack wondering what the heck marjoram is used for anyway, you can easily find a wealth of information and hopefully be inspired to use it one day.

The Flavor Bible undoubtedly improved my culinary improvisation skills. A cookbook can only contain so many recipes, but this isn't a cookbook. This book offers limitless possibilities. Next time you want to create a crazy ice cream flavor, find a savory use for macadamia nuts or decide whether tarragon would help or hurt your dish, make sure you consult The Flavor Bible.

Past references to The Flavor Bible:

how to get a girlfriend Risotto had been on our list of things to make for some time, and a few months ago the slow-motion shots of a Venetian chef flipping risotto on Anthony Bourdain: No Reservations finally compelled us to buy arborio rice.

Since then, we've had three very successful risotto endeavors.

Our first effort was a knockout taste-wise, but too ugly to stand alone in a blog post. (The internet can be cruel.) Then Sycamore chef Mike Odette let me borrow his risotto cookbook, which had great information and fun stories, along with delicious sounding recipes. A few notes:

Before Michael left, we finished off the arborio rice with our highest quality risotto yet. Homemade stock, a whole stick of butter, saffron, shrimp and scallops, and real Parmesan Reggiano.

END_OF_DOCUMENT_TOKEN_TO_BE_REPLACED 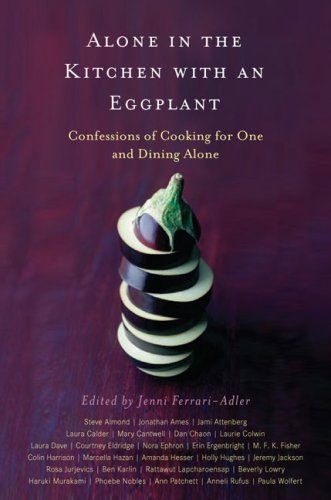 Alone in the Kitchen with an Eggplant is a quality compilation of accounts on cooking and dining alone. I got it during the going-out-of-business sale at The Cooks Library. I like short nonfiction pieces, and I knew with graduation ahead of me I’d probably be eating alone more often.

END_OF_DOCUMENT_TOKEN_TO_BE_REPLACED 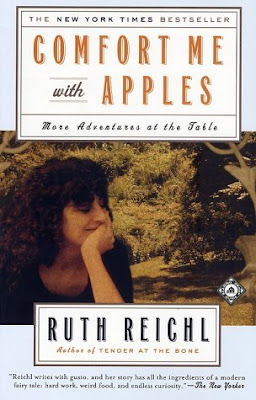 I didn’t know anything about Comfort Me With Apples when I saw it at the school library. It was simply an orange hardcover without any summary or critical praise. But I knew Ruth Reichl was important in food and its journalism, and I figured I could learn from her writing.

The book I picked, however, was more about her than I imagined. Lavish descriptions of food, I expected. Stories of foreign meals and incomparable ingredients, of course. But this was, above all, the story of her life. Food was obviously a large part, but more in a Philip Seymour Hoffman, best supporting actor sort of way than top billing in a blockbuster.

Comfort Me With Apples starts with Reichl landing a job as a restaurant critic. Young and overwhelmed by the glamour, she quickly assumes the persona she thinks she should have, even though it’s antithetical to the Berkeley commune lifestyle she otherwised lived. Before she realizes it, she’s in Paris having an affair with her extravagant boss. She stays with her husband until another affair several years later.

In between reflections on her complex love life are tales from famous kitchens. She befriends Alice Waters, visits her idol Mary Frances (MFK Fisher to the rest of us), and follows Wolfgang Puck around like it’s her job. Oh wait, it was. I found myself both jealous and inspired. I want to eat! I want to travel! I want to write!

Reichl’s life takes so many turns in the second half of the book, I refused to put it down. Smitten like Deb Perelman’s kitchen, I plowed through the last 162 pages last night after work. When I read the last sentence at 2:30 in the morning, I nearly cried. (Probably from exhaustion and relief as well as an emotional reaction to the prose.)

Had Reichl made the whole story up, I would have enjoyed the book but swallowed the perfect ending and forgotten about it. Knowing that this life, these characters are real…it just fascinates me to no end.

An appreciation for good food makes the book that much better, but it’s more something to amuse your bouche while you explore the mind and follow the impressive trajectory of the now editor of Gourmet Magazine.

I, in the meantime, have been once again reminded how much life there is ahead of me, and have renewed excitement about all its possibilities.

Just after the James Beard Award semifinalists were announced, I decided it was time to learn more about Beard himself. I made a special trip to the university library to check out one of his books. I’ll add that in seven semesters at Missouri I never needed a library book for class, but since starting this blog, I have checked out nine books and browsed many others on the second level of the West Stacks.

Anyway, back in February I picked up Beard on Food (an unpleasant title to anyone unfamiliar with the man who might have been the first celebrity chef). The book is a collection of his favorite columns and recipes, starting with the

The essays were all written before 1974, which means they are filled with reminders of how much has changed over the years. We’ve come a long way since the time when wasabi needed to be called “green Japanese horseradish.” Today nearly anyone will answer “yes” to Beard’s query, “Have you encountered pita?” And let’s be thankful that avocados are no longer called “alligator pears” and are not “a very expensive delicacy.”

At times Beard is quite funny. My favorite line being: “Two of my best friends are a stripper and a zester. In case that raises some pretty wild visions, let me hasten to say that they are not girls but gadgets, and I couldn’t do without them in the kitchen.”

You can tell Beard was a man who had profound appreciation for food. Many of his columns are dedicated to a particular ingredient, and he kept his recipes simple enough for each to shine. One essay was called “The Sardine, a Small Miracle.” He talked about one of his favorite sandwiches, “homemade bread, well-buttered, spread with mashed sardines, a few drops of lemon juice, and a thin slice of onion, eaten with a glass of beer or wine.”

I thought about sardines. In my head I didn’t think I liked them, but then I wasn’t sure if I ever really had them. Did I actually dislike them? I decided to buy a tin and find out.

I followed Beard’s recipe for wined sardines on toast. If I was going to like sardines, it was going to be with butter, onion, garlic, wine and lemon, that’s for sure. Turns out all those things are delicious with the little fish, and my friend Marissa agreed. She didn’t think she liked sardines either until actually tasting them this way on homemade bread. So if you’re on the fence, as we were, I feel this could open your horizons. And it would probably make the late James Beard proud.